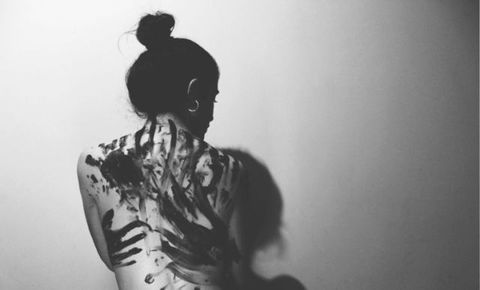 Heart pounding in her ears…. all of a sudden everything become very real.

It happened so quickly, getting to this point. Like…ln her head, when she got to this point in her life…. If ever….it would have taken a lot more than this.

“I’m only 14” she thinks in her head. She feels tears start to prick her eyes and she is not sure if she can stop them. She can feel her heart racing in her chest…BOOM BOOM BOOM…the kind of beats that you think everyone else around you can hear.

All the boys are speaking at once, pushing at her, talking around her like she is not even there, egging each other on.

She feels scared. Na…scratch that…. scared is not the word to use for the emotion rushing through her. She feels sick…like she is about to be sick and hot…so so hot. The fear pulsing through her makes her want to run away…right now. But she can’t. Not a chance.

Suddenly everything slows down. Not really, but for a moment all the pushing and shouting and tugging at her feels like its in the distance. The screaming seems like it’s coming from far away. All she can really hear is the pounding in her ears and one thought comes to her.

What about my mum.

And then snap…back to reality. One of the boys behind her is almost bear hugging her. He is talking in her ear loudly and she can feel his lips moving against that bit between your ear and your cheek. He is saying some evil shit. She does not respond. Just staring ahead, focus in one place, not looking at any of them.

She feels so hot. There is too many of them on her. All pushing and pulling her. They are gathered around her…. all behind her. Every now and then one of them steps forward and does stuff in front of her that she does not want her eyes to see. But she knows this game…. the game where you can’t show how scared or repulsed you are. Where you can’t say “Sop that’s enough”. Not in this life. In this life you pretend that you are bad too. Badder even.

They wont stop saying the same thing to her over and over. And the screaming and shouting. She feels overwhelmed by it all and starts to gulp. She feels herself start to shake. “Shit…they are gonna see that I am scared” she thinks to herself. They don’t notice…for now…too caught up in the hype.

She feels one of the boys slip his hand up beneath her large puffa jacket. He rests his hand on the small of her back. Under her t-shirt. His hand on her bare skin. She knows who it is without even moving her eyes and it gives her Goosebumps. Her face feels like it is on fire and she is frozen on the spot. Can’t move. He does not say a word for a moment. Just slightly tries to push her forward to carry out exactly what she was brought here for. She resists. She feels and hears him chuckle. A deep laugh. A mans laugh. He leans into her ear. Starts talking. Tells her exactly what will happen to her if she does not. Reminds her of what happened to those before her who did not. Tells her that he thought she was better than this. He reminds her of all that he has done for her.

And snap…. she is back in the moment.

She looks down at her arm out in front of her. The boys behind her and now hyped. They are almost screaming with pleasure. Almost begging her to do it.

She looks at the person in front of her who looks as scared as she does. They lock eyes. So much is said with not a single word exchanged between them.

“How the fuck has it ended like this” she thinks to herself. She had made a promise to herself of the things she would and would not do for them. Said there were things that she would never do. Nearly all of them smashed by the gangs around her. Every moral that she had bent and exploited by her “friends”.

She had not spoken a word the whole time. Not as they had come and got her from the flat. Not as they led her to the destination. Not even when they showed her what she had to do. Not a single word. And they had not even noticed? They would not have listened anyway.

She looks down at her arm stretched in front of her. At the knife she had in her hand. She looks at the girl, older than her, pushing herself against the brick wall. Calling her all the names under the sun. Telling her that if she does this she is marked. That she is fucked.

The boys behind her are saying

“Show her you’re a bad gal”

“Don’t let her diss you”

Louder and louder. She feels both scared and alive. Adrenaline rushing through her body.

Then she hears him. At the back. Saying it again.

“If she doesn’t do it then I’m fucking her” …. Another voice…the one who has his hand on her back …on her bare skin… “Shut the fuck up, she’s gonna do it blud…allow her”.

He pushes her forward and this time she lets him. She feels like she is gonna pass out. The girl…the one they want her to stab…she is still giving it. Still telling her that she won’t do it. That she is a “Likkle girl to me”.

She thrust her hand forward hard and the knife went straight into the girl’s leg. In her thigh. She can feel the material from the girl’s jeans against her hand as the knife has gone all the way in. She looks at her hand and then her head shoots straight up into the face of the girl who is taller than her. The girl’s mouth is wide, and it looks likes she is screaming but no sound is coming out. She looks scared.

Wait…no…she is screaming. The sound is deafening. Or are the boys making that noise.

She is still holding the handle of the knife…not sue what has happened or what to do now. There is so much noise. And blood.

Suddenly she is lifted in the air by her waist and spun round, she lefts go of the knife as this happens. One of the boys is pulling her arm telling her to run. She goes to look back at the girl, but the boy slaps her in the head and shouts

And so, she runs…. runs so fast that her cap comes off and falls behind her in the road. She doesn’t look back at it. She just runs. That kind of run when your head is back, your hair is streaming behind you and your running so fast you feel like you could run for ever.

She can hear people running behind her. She runs faster. A couple of the boys ran past her. Big smiles on their faces, shouting at each other.

They turn onto the estate, where she should turn as well. But she runs past the turning and keeps running. She hears the boys call after her. Telling her to stop.

But she just keeps on running.