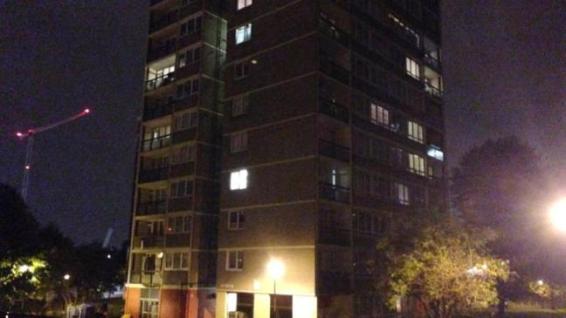 She looked around. She hated being out at this time. It was always so quite and freaky. The boy she was working with had gone off to get some munchies and said he would be back in a bit. She would be going home in a minute. Standing here was just long. She pulled her hood up over her ears. Suddenly she heard a noise and her head shot up. It was the sound of someone walking and accidently kicking a can. On the estate, them kind of noises echoed. Her eyes shot up to the flat above where the others were. The lights were on, all the windows open but not much noise coming out. There was a strong smell of weed and that nasty fishy smell that comes with the hard-core drugs. She wrinkled up her nose. She knew that everyone up in that flat were all mash up on whatever shit they had pumped into their bodies.

She would rather stand out here in the cold until her time was up, than sit in that crack house any day of the week. She could see two people walking through the park area in the middle of the estate towards her. She couldn’t see who they were, too dark, too far away. She squeezed the knife in her pocket…just to make sure it was there…the handle warm and reassuring. She gripped it tightly. Waiting.

The two people walking towards her, she could make them out now, it was 2 boys she knew well. She let out a sigh of relief. Both her age not really involved in the stuff she was. She kind of liked one of them. She would never ever tell anyone that! No way. But the blonde one, she thought he was nice. She felt her face burn with embarrassment. She wondered what the boys were doing out this time of night. Maybe on their way home from somewhere. She felt unsure as these boys were not boys that spent time on the estate. The people she moved with would often cause these two trouble when they walked home. The other boy, not the blonde one, they had mugged him before.

Now she came to think of it, she hadn’t seen either of these boys in a while. Like a good 2 months. Even though they lived quite close to her. As they got closer, she felt her mouth drop open a little. These boys look rough. I mean these boys looked like they had not slept in days. Had not washed. Had not eaten. They walked towards her and the blonde one said, “Got any gear”. Not a hello…not a smile…not an acknowledgement of the 8 years she and he had known each other.

“Got any gear” he said again. She was aware that she had not reacted to the first time he asked. The words would not register. She sold crack…to crack heads…not these boys. The other boy, the one she didn’t know as well, got 2 £20 notes’ out of his back pocket and thrust them at her. “Come on Blondy, sort it out”. Hearing him say her name hurt. So, they did know who she was. But right now, all she was to them was a crack dealer.

She spat two rocks out of her mouth, took the money and passed them the rocks. The blonde one caught her eye for a moment. She hardly recognised the boy she was looking at. Last summer she had sat with him on the common one night and they had shared cider and cracked joke for hours. He looked at her now and said, “you should go home”. He looked away and the two boys left. One aged 14 and one aged 15. Both out in the middle of the night buying crack.

Blondy looked up and her bredrin had come back from the 7- 11. He was eating a packet of crisps. “Yo, Blonde, what’s good” he said as he got close. She just nodded. She took a fag out her other coat pocket and lit it, taking a deep pull on it. “Ryan was just here, you know that kid that plays football”. Her pal nodded “Yer, I know him. What do you mean “here” like walking through? He needs to be careful man don’t get jacked”. She shook her head “Na, like he just came here and picked up”. Her pal stopped eating and raised his eye brows eyes “Rah, aint he like 14”  he said with pure shock in his voice “”These crack heads are getting younger bwoy, all good, more dollar for us” . Blondy looked at her pal, flicked her fag away that she had taken 2 pulls of and started to walk away. “Oi, where you going” her pal called out.

“I’m done” she called back without turning around. She heard him kiss his teeth. “In a bit” he said as she walked away…