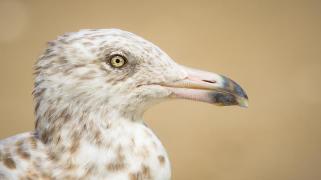 As I was looking at my phone, I heard a familiar voice. I looked up and walking down the platform talking were two young men who are known active gang members in the local community. One of them has just recently come out of prison.

Sometimes I will recognise a young person not because I personally know them, but because I have seen their face time and time again in pictures and videos associated with young people I work with.

Of the two young men walking towards me, one I know from working with and the other I know the face. The one who knows me nodded and the two boys sat on the bench next two me. The were talking away about what they would be doing for the rest of the day.

The boys pulled out some food, crisp’s, and a wrap, and started eating. A young seagull landed on the platform. It still had fluff instead of full feathers. It started squawking (The way seagulls do) as if it was calling for its mum.

Now, the two young men that had sat down next to me at the train station are what some would call “Roadmen”. The one that has just come out of prison has a reputation within the local community for not being the most …friendly …Roadman, if you get what I am saying.

They continued to chat, and the baby seagull stood in front of them. The first boy, the one that has just got out of prison, we will call him J said “You know what, I used to hate seeing birds when I was in Pen (Prison). I felt pissed that they could land in the yard and then just fly away, And I had to just stay”. The other boy, who will shall call D said “Rah, I didn’t even think of it like that”. The baby seagull walked closer to the boys and squawked again. J said, “You know you can’t touch them init, baby birds, because if the mum smells like humans on them, then they kick them out the nest”. D replied, “Like us init, if my mum smells weed on me I’m gonna get kicked out my nest”. Both boys cracked up laughing. I smiled to myself.

Baby seagull walks closer. J takes a piece of his bread and chucks it on the train line. The baby seagull jumps down onto the line to get it.

J: “Let it get hit by a train init, no one cares about dem birds”

D: “Like us, they are flying rats and we are hood rats” (This is clearly a joke but neither boy smile or laugh)

Baby seagull half fly’s back on the station and starts crying again. J chucks some bread but this time near him. Baby seagull walks over and eats it. J tears another bit of bread and this time holds it in his hand and gestures to the bird to come get it. The bird stays still and does not come.

D: “Change your face, you look like your gonna kick it when it gets close. Make your face better”

I can’t see Js face, but his body shifts slightly. Baby bird starts edging closer and closer. Suddenly he makes a little dash forward and takes the bread from Js hand. Both boys shout in whoops of delight and J turns too me, big old smile on his face, like a kid who just got a puppy to sit. I smile back.

Baby Bob comes straight over and takes the bread gently from his hand. Both boys are grinning their heads off now. D gets a piece of bread and chucks it gently in the air. Bob jumps and catches it. The boys swear and whoop with happiness. They do this several more times, getting Bob to catch the bread in his beak. Each time looking back at me with big silly smiles on their face. I say, “Careful boys, its well sunny, Bob will get hot”. Both boys stop smiling and look serios.

J takes his bottle of water and slowly pours it out the bottle onto the floor next to Bob, making like a mini water fountain. And Bob only bloody goes and drinks it.

Suddenly the train announcement voice fills the air and Bob jumps back and fly’s away. Like that. Over.

D: “You know, all dem seagulls aint the same. You look at them and think they are the same, but they aint. Bob is safe”

J nods. “Init, like 5 minutes ago I hated seagulls and wanted to send him on the track but now…I dunno…like, they are clam if you take the time. Like, if you treat them nice den they act nice”

The train comes, and we go our separate ways. I sit at the window and wonder if the Roadman knows how much he has in common with the seagull…..