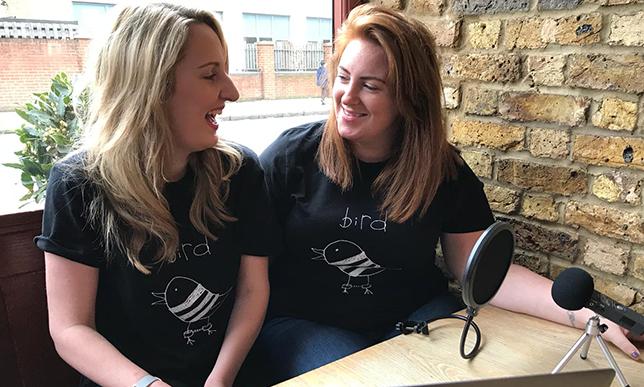 So, readers/viewers, we are almost there. We will soon be at the end of the Blondy’s people journey and the last 2 interviews you will see…. bwoy…. I don’t even know how to tell you about them….so I won’t …you will have to keep watching.

Today’s Interview its with two very amazing women, Nina McNamara and Kate Littler who created Bird Podcast.They, just like me, saw something they wanted to speak out about and decided that instead of just sitting there thinking about it…they would do something about it and Bird Podcast was born.

Blondy never had a voice. Not really. Some people heard her and did nothing. Others didn’t even listen. There is an African proverb that always comes to mind when I think of Blondy and children like her….

That hits me differently.

Blondy and children like her think that no one knows what they are going through. It’s a teenage thing. But it can also be an abuse thing. People think that no one will understand what is going on and so many do not speak out.

It’s a shame because the voice of the child is paramount, even before the law made it so, in my personal opinion.

As Blondy grew older, people still did not listen. People just assumed. And eventually, Blondy’s voice was sadly lost. Another echo of a child failed by the system.

But a few years ago, I heard her again. Blondy. I mean she has always been there, in my subconscious, telling me to be scared and to be cautious, but now I could here her in a different way. She wanted to stop being hidden, and so out journey began.

That’s where Nina and Kate come in. They had seen some of the stuff I was doing and asked me to speak on their pod cast. They were just starting out and I remember thinking “Why would they want to talk to me”. But I agreed and the rest is history. You can hear that first Pod cast here.
Being part of the podcast made me realise that not only did I have a platform, but also there were other people like me, who felt like me, who knew what it was like to live like me…..and suddenly I didn’t feel like a loan voice.

I started to listen to the podcasts and each one seemed to speak straight into my heart. The most powerful part for me was hearing how men felt and coped in prison. My own Dad spent most of my life in prison and I could never understand how he just switched off from me during that time. But listening to the Bird podcast gave me a glimpse into prison life that I didn’t really understand.

Nina and Kate created Bird podcast so they could talk about the things they wanted to. They allow real life stories from prison to be shared with whoever wants to here it (10,000 at the last count just so you know).  They ask the question that needs to be asked “What does it really mean to do time?” and then get as many different opinions as they can on that subject. I don’t think they truly know how epic they both are. Did I mention they were awarded ‘Outstanding Digital Media Champion’ winners at the Criminal Justice Alliance awards in 2019…. yup….

My greatest memory is of them both messaging me frantically (I think Nina was near passing out) when they discovered that they had been mentioned in Grazia magazine. We all went a bit mad a lot of screeching was to be had. It still makes me smile now.

Bird Podcast is part of Blondy’s people because as Professionals, they both strive to make change and within the bird Podcast they continue that. They give people a voice and publish the truth and is something I highly respect and advocate for

They are also part of Blondy’s people because as A child, I think I may have been part of the new project they are talking about, interviewing kids from YOS. I Believe that if they had stumbled across me they would have let me speak on their platform no questions asked. Because they are truth hunters. And Blondy needed that.

You can see my earlier  interview with Kate HERE

Listen to My podcast here…. You want UK Street Gangs| A look inside

They even have their own clothing range, which you can view HERE (Look out for the stunning Blonde modelling the T-Shirts)

And final,  NEW EPISODE! Bird explore relationships, life & love in @HMPPentonville as They speak to four men about prison officers, family and their own partners to find out what it really means to do time