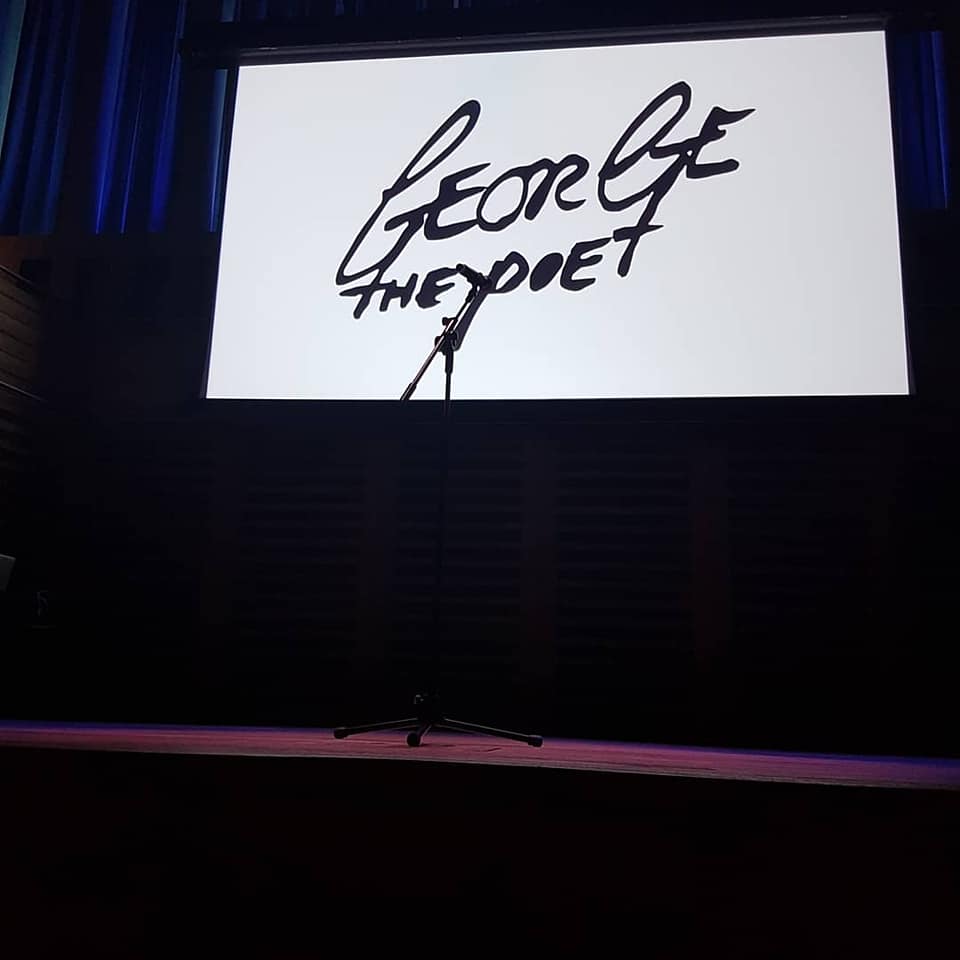 As I work in a school, this week has been hard as its been the first week back. Its been the hardest return I have ever known in terms of my safeguarding role, pile on top of that my studies and being a single mum, come Friday I am sooooo tired. I don’t want to do anything but go home and recharge.

During the summer, on a sunny afternoon I purchased my tickets for George the Poet. Even though they were on the first week back I thought, it will be fine, I will just go to London and back from Kent. I had visions of me, last day of work, a sunny Friday afternoon, jump on a train to London in my flip flops.

But today its been cold and windy. I am sitting at home, at 4:30 pm, staring at my tickets and I just can’t do it. My anxiety has kicked in, I just want to go to bed and the thought of entering London on a Friday night is not the one. Wait…. oh…Its just started raining…

But I so badly want to see George the Poet. Have followed his work for the longest time. Imagine if I got to tell him how I use his work to educate others! So, with minutes to spear…and I mean minutes…My cab got to the station at 5:01 pm and my train was at 5:05, I hopped on the train and made my way to the London podcast festival at Kings Place. One on the train I put in my headphones and listened to my favorite Podcast of Georges….3.5. I love every part of the podcast and plan to use it to educate schools. And if right now your thinking “George’s Podcast….3.5…what are you chatting about?”. The only answer to that is … Have you heard George’s podcast? If not…best, you press this link right HERE and start listening and learning and growing.

I have used George’s spoken word “Estate of mind” in my training for ever. I use it to show professionals a snapshot of how the mind of a young person coming from a minority background may look. IF you have ever attended my training and seen me use that spoken word, you will know that it gets you up and listening. Anyway…. back to the story.

I arrive in London. My friend Grace is on her way so I ask reception if I can leave her ticket there so she can join me when she arrives. The lady at Kings place (I didn’t catch your name) was so helpful so thank you.

Did I mention I had front row tickets? Bwoy if I am gonna leave my bed on a Friday night after a week at work, you dun know that I have front row tickets. I sit down and take in the beauty of it all. The stage is so close I can almost touch it from my seat. I can’t believe I am here. I bought tickets to see the show last year and couldn’t go. But I am here now.

Ben Brick comes out and sets up his computer, music starts, and we wait…the anticipation is making me feel sick. What if he aint as good as what I listen too…what if he arrogant and rude what if…

And then he is on stage. Big old smile on his face and George starts to talk…and I smile and relax…it’s all good…it’s the same George I have listened to a million times. No airs and graces. No fake accent trying to be from ends….

From start to finish his words were inspiring, and I am not just saying that, you all know me, I am a truth teller…I promise you, when George spoke, no one else did. He was funny and engaging and even addressed the elephant in the room!

George spoke about his own challenges growing up and spoke about how he had to learn to navigate relationships, just like we all do, and that he had to discover his romantic side…which caused his best friend in the audience to put down one piece of laughing ..so I guess George must be still working on that part 😊 He spoke about our young people not knowing here their place in society is and being socially excluded which means that sometimes they have to find their own status. And that may not always be positive.

That is something I see daily. Lost children and young people, unloved and unwanted, trying to create some kind of status…not always positive.

He spoke about how grime created a space for some of these young people, a platform to talk about the issues that are affecting…. affecting them right now. Because we can be sure that Parliament is not doing that.

That’s when he addressed the elephant in the room (Well…he had no choice…Ben Brick was making sure of that) … The chicken box madness that was thrust upon our society. My views are here and to be fair, George’s views were pretty much the same. How could they not be, when we have both seen the effects this kind of thing could have on a society.

George spoke about education, and if he was in charge, how the education system would look. He didn’t talk about having said chicken boxes in the cafeteria, or PRUS being used. He spoke about listening…listening to our young peoples hops and dreams. Taking on bored their culture and the society they are being raised in. Take time to understand.  He spoke about how the fact that he found rap, and a way to express how he was feeling, helped him get through his GCSE’s…Which reminds me of my year 11s from 2018 and how we learnt 4 poems by reciting them to a grime instrumental. I don’t know if the English department knew we were doing that…. I don’t know if the head did…but that’s what we did.  George spoke about the poets he studied in school and said that instead of analysing ancient verse we should analyse what WE say to each other…….and relationships and growth and understanding is something we should be talking to our young people about. Under George’s education system, we would set aside time everyday to listen. Listen to the voices, decisions and the choices, musicians and politicians the whispers and the noises

George then said somthing that hit hard for me, it sung true for so many young males that I have worked with…These kids are exposed to much more than they would have been before, I never knew that I could make a women insecure, or maybe I did but I was just hooding and immature, giving samples when I couldn’t give her more….

George then asked the audience to take part. To ask him a question. There were some juicy ones. I so badly wanted to put my hand up. I had been wanting to tell him this a long time. But I couldn’t…. then at the end I thought….This is your chance…and the mic was in my hand!

I looked up at the stage and stuttered…” Hello”. I said that I didn’t have a question, I had something to tell him. I said that I use his work to educate people when talking about gangs and exploitation. That I use his work to raise aspiration in the young people I work with. I told George about the bow who was pacing up and down in front of me…ready to go and stab some brer ….that I had not know how to talk him out of it, but started playing Georges podcast 3.5….how the boy had started to listen without even realising. He started to calm….he sat and we spoke. We spoke sense. HE asked who that was talking on my speakers and I said “That’s George the Poet” and my boy said “Yer…he gets it…Is there more I can listen too”? and how that same boy came back to me the next day with a piece of paper where he had tried to write down how he was feeling in rhythm. Just like George. And how instead of going to the fight that night…..he stayed in and listened to the next part of the podcast. Because he was scared.

So, I told George that and then said, “You saved his life that night”. I didn’t plan to say it. I just wanted to tell George about how I use his work, But I am glad I did because people clapped and shouted so loud…and George looked genuinely taken back…I am glad I had a chance to tell him how his work is reaching to those who need it. 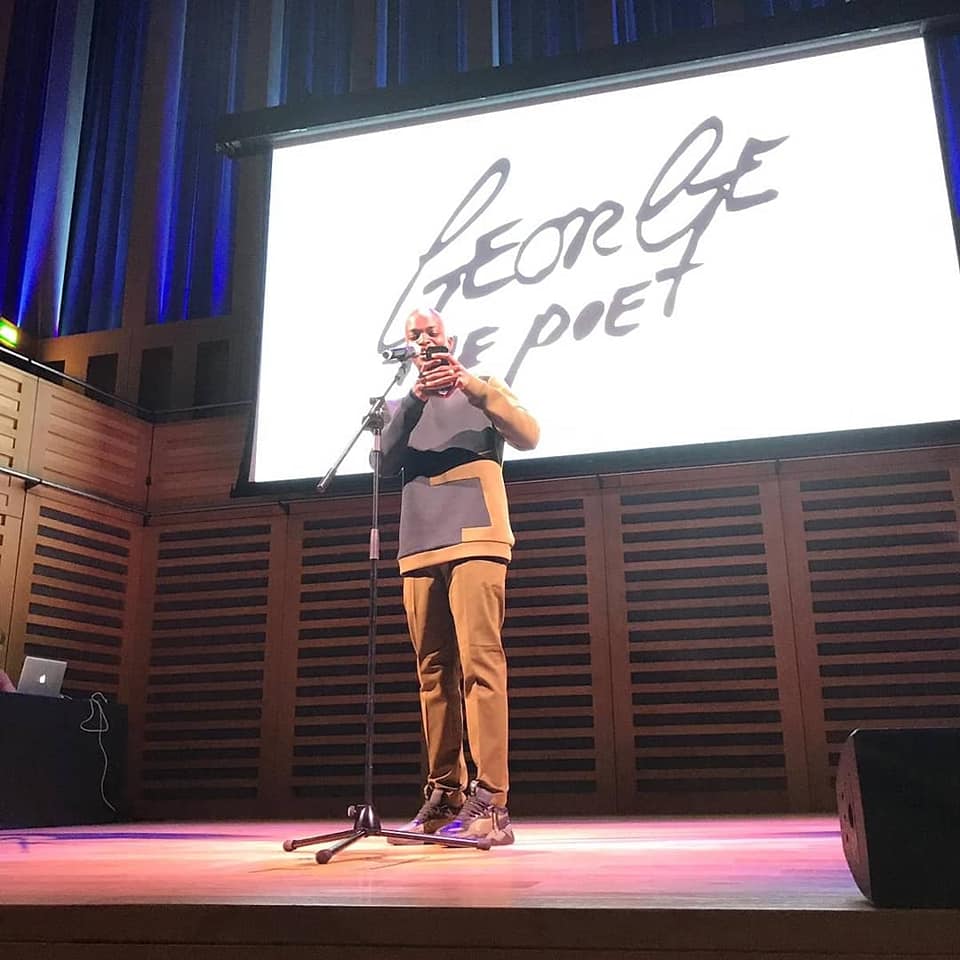 And then it was over….boom…..I felt like I had just been educated in a way I didn’t know possible

He told us a secret, he said that he can make people see things that arnt in front of their eyes…which he has only recently come to realise…and George most certainly delivered this to the crowd sitting before him. He explained that he has not always known what do with his talent and sees it as something between entertainment and education…and he is trying to find a balance. George spoke about the changes that need to take place, that must take place so that we as a society can grow and change and …what…. you want to know what his ideas are. Best you listen to the podcast…. Then add it to every phone and every other device.

It’s also got me thinking….what if Out of the Shadows started a podcast…….