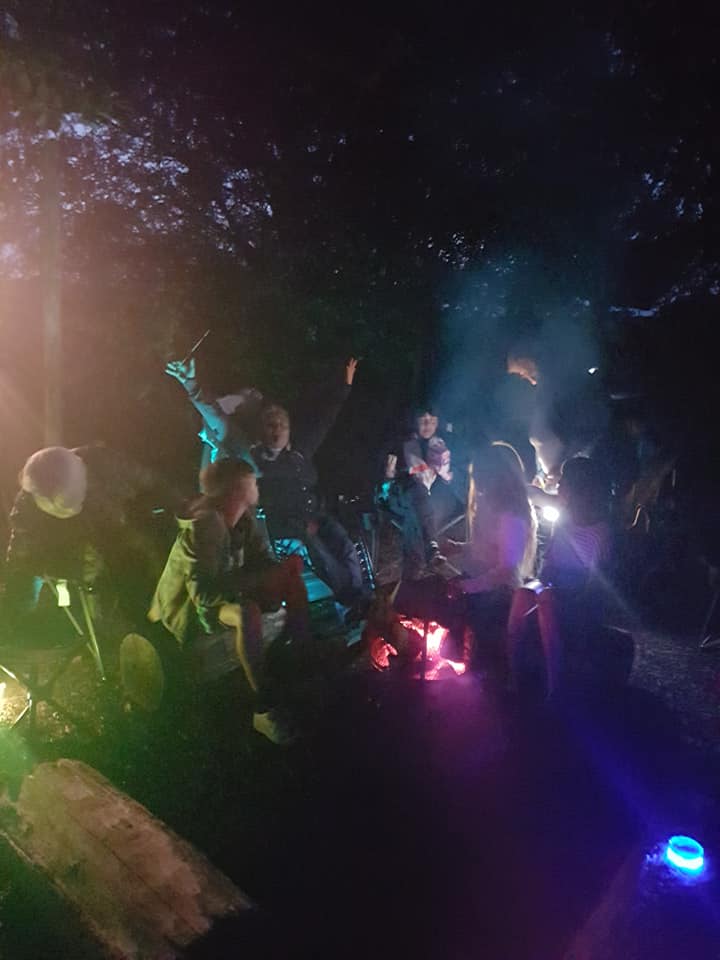 Have you ever had a surreal moment …when you just stop and think….is this actually happening? I often do and they are usually in a very negative way. Like I will be in the middle of a child disclosing and think…is this happening.

But sometimes It’s in a positive way. And I have had the privilege of having multiple “Is this real” moments the past week.

My blogs are often full of anger and injustice. But today, this blog is filled with good vibes only (Apart from the blood) But we will get to that.

If you had said to me even 6 months ago that I would be taking my daughter off to do camping/glamping with no electricity and with group of people, some of who I have never meet I would have laughed. People that know me would have laughed. For many reasons, and one of the main reasons is that my daughter finds it hard to communicate with new people and can become easily overwhelmed. She lacks the confidence to go and “Do her own thing” and I lack the confidence to let her do it. I worry about letting her out of my sight. Plus…have you met me…camping probs aint something you would associate with me to be fair.

But my very good friend Grace Shore Banks is determined to make me into a happy person and so she suggested we go to Nethergong camping site. Me and my daughter and Grace and her children and that we may meet up with people when we get there.

And so, on Tuesday we started our adventure. Now, as my readers may remember I have actually done camping for the first time this year when went to Love Supreme. But this time was different. This time I had a high maintenance daughter with me! My daughter had decided that she would only be staying for 2 days as she most definitely “Will not like having no computer for a whole 5 days Mummy!”. I tried to pack extra clothes for her, but she kept finding them and taking them out. Number one issue for my daughter (Who is yet to be diagnosed with ASD) is sensory issues…and the top of those sensory issues is clothing. I won’t bore you will the list of things she can’t wear but just know this…. if I get the clothing wrong…its game over.

SO, we packed, and I packed food I thought we might need. There was no way my daughter would eat just any food and people won’t be willing to pander to her needs…so I made sure we had all basis covered.

When we were driving there (Grace driving obviously because I can’t drive) I didn’t know what to expect, Not really. But when we arrived…. WOW. I am not sure what else to say. It was stunning. It was beautiful. There were baby ducks as you arrived, there were children running and playing and laughing, there was a big pond with wildlife. We pulled up to where we would be staying. We had booked 2 different things. A Hut and a vintage caravan. We allowed the girls to choose. I had said that My daughter would not choose the caravan (She say they sound ‘Tinny’) but as she went into this little caravan I could here her say “We are sleeping here Mummy”. I went to have a look…. stunning. It was like time had gone backwards. I felt like I was in the 60s. The caravan had all these original features and the attention to detail was above and beyond. Here is a Picture.

Dan, who helps to run the site, had set everything up for us. EVERYTHING. The staff are so helpful and friendly its unreal. Nothing was too much.

My daughter and Graces daughter were off already. They wanted to find as many creatures as they could and within 20 mins my daughter comes rushing back to say she had found an axolotl. I said she they can’t have…but…they had!

To get you in the mind set of this place I want you to think of the film ‘Stand by me’. A proper hazy summer where things just kind of happened.

My daughter has a lump on her neck that needs removing. The NHS are being …disgusting about getting it removed. Anyhow, if it gets knocked it will bleed excessively and sometimes, she needs to go to the hospital. So here I am, sitting with people I have known about an hour, getting to know each other and such when my daughter runs over and says, “I’m bleeding”. If there was ever an understatement of the year. The front of her Dress was crimson and as I pulled away the plaster on her neck the blood literally gushed. I tied to stay calm despite being in a filed with no first aider and no running water. This is when I truly met my friend Amanda. Or…as she was renamed…Mandem. She stepped forward and did not panic, sat with me and applied ice to her neck and then calmly told me that the bleeding would not stop, and we needed to go to the hospital. She was calm when I needed calm. So, Grace (of course) too us to the hospital. Holiday done. No coming back from this. If you know my baby girl, you will know that this is not an exaggeration. But she asked to come back!

And we had the most amazing few days ever!

Did I mention that I was dying of some kind of flu bug the first 2 days…? temperature of 39 at one During point…. proper dying. SO, the little community that started to build around us took care of me. They let me just sit and they cooked me food. That when the camp Mumma came into play…Annette…the women who cooked me back to health! She kept producing this amazing food that I could only take a few bites off and she just kept it coming! And there was my Grace…. pushing Vitamin C on me every hour like a drug dealer. I was hiding them in my pockets, and she was like no…. take them.

During all this we all got talking about what our jobs were and when I announced what I do there were lots of questions and a few “We don’t have any gang issues where we live”. You know I hear this every day. And it’s not true…so I gathered the teens that were with us and I asked them…” Is there a gang issue in your area” and they all replied yes? And when on to talk about this, with the parents looking on. By the end of the day a lot of learning and understanding had taken place between adults and children about what the world is really like for our young people.

Later that night was one of the most surreal nights of my life. I cat really tell you how it panned out, but I want you to picture the scene. We are in an open part of a forest…. we are around a beautiful campfire. There are all ages and backgrounds.  The smell of sausages is in the air. Everyone is animated and taking to each other…about…grime music!

What I realised from talking to the young people and the parents earlier that day was that there was a massive gap between what the adults and the children knew and understood about each other. About school. About the walk home. All the teens I had spoken to had told me about gang culture in their area, but they also made it clear that they didn’t really understand exploitation. How to keep safe. What was actually happening in their community.

So, we …as a group…listened to grime…adults vs young people…and they had to translate grime into English. And it was amazing. The young people were so confident before it started that they would know and within 10 seconds realised that actually…they had no clue what a lot of the words they listen to even mean. There was plenty a laugh had but at the end of the game was the start of a very intense conversation led by the young people, directed at me. “What is a trap house?” “What if people make s do things?” “What is the mental health impact of drugs?” There were the questions that I sat answering around the cam fire and we eventually took this away from the parents so that they could ask even deeper questions. It was very empowering for the young people there and also gave them a safe place to ask questions about things that maybe in front of their peers they could not.

We ended up staying from Tuesday until Saturday morning. We had a night in front of the fire blowing bubbles and toasting marshmallows…very surreal. We listened to jungle music under the stars (Very quietly) we went on long walks and got lost…. I tried food I had never heard of……Fresh fish was cooked on the BBQ.

But most importantly my daughter was free. Free from everything. She ran and got dirty and found creatures and ate late. She had no computer, no one judging her. She was able to walk around the camp site safe. I knew she was safe. I didn’t see her for hours. She would come back and talk about seeing this and that.

She and Graces daughter made memories that they will probably remember their whole life.

In stand by me there is a quote “I never had any friends later on like the ones I had when I was twelve. Jesus, does anyone?”

That’s what it felt like. You come away from Nethergong like damn…. I just lived …I just felt like what it is to live and be free and just ….be.

I don’t know if my daughter will ever have a summer like that again. Every kid needs that memory of ‘that’ summer. We all have it. The one you look back on and think…now that was the good times. I think I just watched that be created for my daughter and I loved every second of it.

If you do anything next summer, take your children to Nethergong and let them experience a good old-fashioned summer, a safe place, a place where they can just be children. 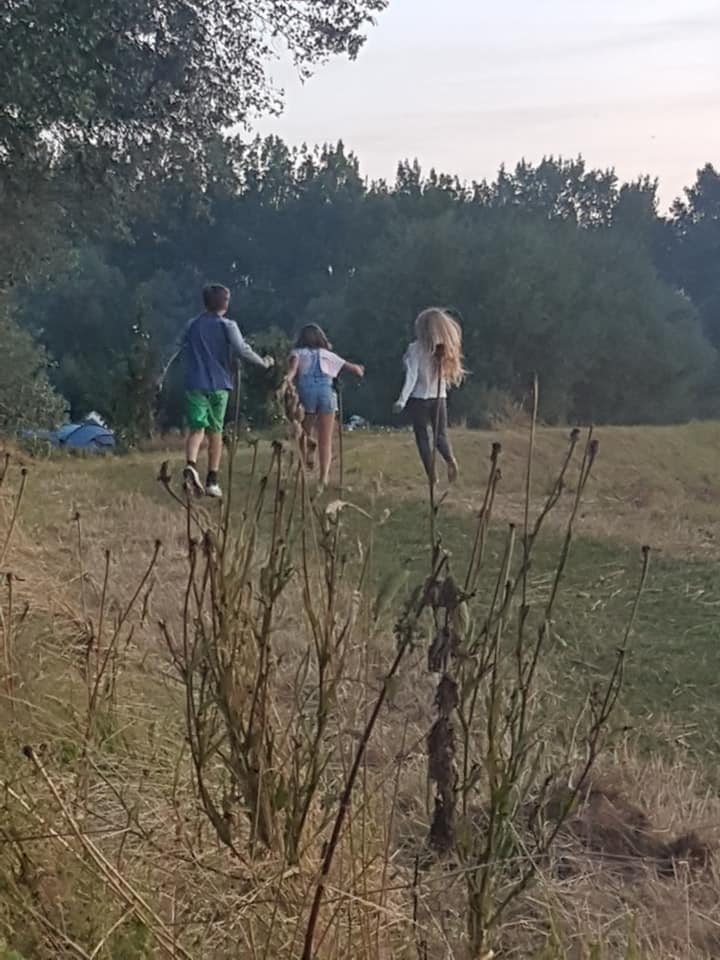 You can view Nethergong camping here