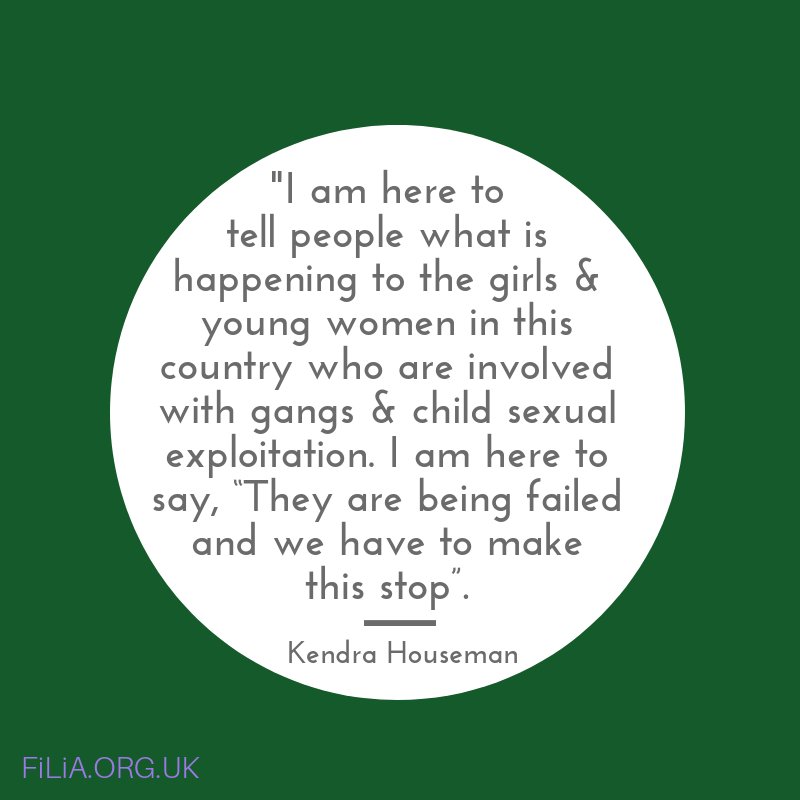 16 days of Activism is an awareness campaign that runs from the 25th November to the 10th of December. It helps to spread awareness of the Violence women and girls experience. It’s a move to break the silence of abuse and to speak for those who cannot.

Filia have put me as their day 8 of  #16DaysOfActivism. Can you believe it! The pride I feel right now is unreal, that Filia see me as someone they would include.

Day 8 of #16DaysOfActivism. Kendra Houseman @Outofthe_Shadow spoke on the ‘Failed by the State’ panel at #FiLiA2018 on teenagers exploited in gangs, groomed into prostitution but regarded by the state as authors of their own misfortune. #cse #endwawg #HearMeToo #colourmeorange

And then it has quote from me that says:

“I am here to tell people what is happening to the girls and young women in this country who are involved with gangs and child sexual exploitation. I am here to say that they are being failed and we have to make this stop” You can view it HERE

I tell you what…I will take that all day long.

So, I guess this is where I speak out about violence against women.

Day 8 #16DaysOfActivism: My first memory of violence against women

This my account of my first memory of violence against women, its not my first actual encounter, but the first one that I remember.

Its Christmas but not Christmas day. The tree is up and its very cold. I am aged between 3-5 years of age. I am sitting in a large armchair and have a big tray on my lap and I am doing a puzzle.

This memory starts mid action, I can’t tell you the build up or anything, the memory literally starts with me in this large arm chair with the tray on my lap.

A man, I used to think its my dad but its not, he is shouting at my mum. They are standing behind the sofa. The sofa is pushed in towards the middle of the room where the calor gas fire is (The only heating in the flat) and they are standing behind it. I am just watching. I don’t believe I am crying or anything at this point. Kind of shows you how normalized I was to this kind of behavior. But this time is different.

Usually when there is shouting, I am sent to my room or am left alone in a room on my own until its finished. But for some reason I am in the room. He is shouting so loud that I put my hands over my ears. My mums head is just down. She is standing there just looking at the floor, like a naughty child being told off. I think she is in a nighty. Like an old fashioned one with a high neck. The man is fully clothed. I can not tell you a single word he is saying, the memory is not like that. I think I may have blocked out the words. I don’t know.

I can tell by the way her shoulders are going up and down that she is crying. He starts smacking her around the head, like slaps I guess, as if he is clipping her around the ear. She says ouch and puts her hand up to her ear. He gets so angry and pulls her arm down sharply to her side and then boxes her in the side of the head. She stumbles, and he catches her and stands her back up and does it again and she falls. I can’t see her now because she is behind the sofa. He looks over at me. No expression that I remember.

And the he starts beating her. He is bending down and brining his arms up and the punching down with force. He is still shouting.

And then …in this memory…the sound suddenly comes back on and she is screaming my name. Is she asking me for help? Is she telling me to run? Is she telling him not to hurt me? I have no idea. He stands up straight but is looking down at her. He is sweating, and he wipes his head with his arm. He then starts kicking. I don’t know what he is kicking because I can’t see, but it is very noisy like he is kicking the sofa. Mum is not screaming. She is not making any noise. He wipes his hand across his head again.

I am screaming. I am crying. I can hear my screams in my ears. I am cold. He looks at me and bends down and now I can’t see anyone as they are both behind the sofa. He stands back up, but I have no concept of how long they weer both out of sight. He walks over to me and put his hands out to me as if he wants to pick me up. I feel scared and put my small arms out to him, I need comfort of some kind. Then I see that he has blood all over his hands and I start screaming.

Things get blurry at this point. He puts his hand under the tray I have on my lap and knocks it high into the air, puzzle bits going everywhere. He grabs me by one of my arms. straight in the air and I am sort of dangling and it really hurts under my armpit. He walks to my mums’ room and throws me onto the double bed and tells me to shut up. He slams the door and it is dark. I get under the covers and I cry. I must fall asleep at some point.

When I wake up, the curtains are open, and the light is coming in. It is not proper light, it’s more like sunrise kind of light. I look, and mum is laying next to me. Her face is strange, and I don’t like it. She is sleeping but I think that when she wakes up, she won’t be able to open her eyes because they are swollen so bad. They are like a purple/black color. One side is worse than the other. Her top lip is massive, and I mean massive. I reach out and poke it and it feels all smooth and shiny. I don’t like it. She has some blood on her face, around her nose, its all dark and sticky looking. Her hair is big and messy like my dolls when I don’t brush the hair.

The man is also in the bed. He is sleeping the other side of me, still with his clothes on. I get out of bed quietly and go into the living room. The fire is not on, but I sit in front of it anyway. There are bits of puzzle over the floor.  I go back in the bedroom to ask Mummy to turn the fire on. She wakes up, gets up slowly and comes and puts the fire on. I can’t look at her face because it frightens me.

I was 15 the last time a man tried to lay a hand on my mother. I had found my voice and my power by this time. My own farther, fresh out of prison, he moved back home and was soon back to his old ways. The day he got out my mum was back running around after him. I couldn’t even bare to look at him. Then, about 2 weeks after being out, he asked her to get him a cake or something. She was tired, and she looked so small sitting on the sofa. I was in the living room just about to go out. I said, “Don’t get up mum” and then to my farther “You can get it yourself”. He looked at me wide-eyed and the turned to my mum and asked if she was going to let her daughter speak to him like that. She just sat there not sure what to do. No one spoke out to my farther. She got up and he jumped up as well and grabbed her by the arm and pulled her towards him. My mum was about 5’ 5 and my Dad about 6’ 6. This was all in the same living room where I had watched her get beaten whilst I sat with a puzzle on my lap when I was small. I had seen her get many a beating since then. He started shouting at her. My own son was in the bedroom next door sleeping. He was 2 weeks old. My mum stuttered as my dad shouted and said she was sorry. He let go on her arm and raised his hand high to slap her face.

I walked over calmly and stood in front of my mum, facing him. He looked at me with his arm still high. We just locked eyes. Just looking at each other. I said…and I remember it so clearly…I said “Put your fucking hand down. And know this. If you ever touch my mum again, I will kill you”. He went to speak, and I said, “If you’re such a bad man then hit me”. I stepped the one step that separated ups so that I was so close to him that I could feel his breath on my face. He was breathing hard. I could also hear my mum breathing behind me. He lowered his hand and placed it by his side. “Your disgusting” I said with gritted teeth. He looked over my shoulder at my mum and then muttered something in Italian. He went to stay at a friend’s house that night and within a week or two he got his own flat. He never lived with us from that day forward. My mum would go and stay with him in his flat and eventually she moved in with him. But me and my farther never lived together again. And as far as I know, he never laid a hand on her. He was an amazing grandfather to my sons and never even so much as raised his voice to them. But he knew as well as I did that if he had touched my mum ever again, I would have truly killed him.

It also shows that the only way that I knew to deal with thigs was through threats and violence. That was how my brain was conditioned. That was what the men in my life had created.

I’m telling you this because there is a proven link between girls witnessing this kind of violence at an early age and then their gradual transition into gangs and exploitation. I would say about 80% of the girls I support will speak of this type of violence being prevalent in their early years.

This kind of violence against women has been going on for so long and so many lives are lost it is unspeakable. The impact on a girl’s life, witnessing this kind of thing so early means that violence is normalized to her and then if violence is used against her…well…in my case, I was already used to it.

Speak out people, lets get this kind of violence out in the open once and for all.

Make sure you follow us at Out of the Shadows