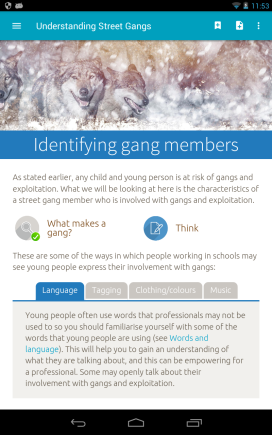 Well… it seems that Out of the Shadows is starting to make moves.

I have just had my second online training published by Pearson publishers.

It was my ex-boss at the time who came up with the idea of me doing it. He often said I should write a book about my life and I said….na..don’t think that is for me. One day he asked if I could create some online training for staff at school. I said yes and off I went.

I had never created online training before! But that’s what I am like. If I think I can do something I will just go off and of and do it. It seems that years of building resilience and having to do things for myself has had some huge benefits in adult life. I plumbed a washing machine last year with just a youtube clip and a spanner.

When I came back with what I had created my then boss said “Ok, that’s good. That’s very good. Let’s get you a publisher so that you can make a living from this”. This was 9 in the morning and my boss was on his 28th coffee so I just said, “Ok sir” and left. As if I was going to get a publisher! What was he thinking. Bur he did contact the publisher and they asked to see my work. Then they contacted me and said that, yes, they would love to work with me.

Even now I can remember that feeling like…what!! Don’t play me like that! I emailed them back and said that I have bad dyslexia. And work full time. And never done this before. I was just giving them the heads up how rubbish I was.

They reassured me on each one of those worries and said, “let’s get started”.

So, when my first publication came out I didn’t really tell anyone. I just got the email from the publisher to say it had gone live and thought…wow… who would have ever thought that I..little old Blondie who could not make it through a English class from the age of 13.. would have a publisher!

I wanted to tell everyone. But I didn’t. Because I thought people would think I was winding them up or not take me seriously. See, that the thing, years of being told how stupid I was having had a lasting impact. A deep scare is formed, and it can take the smallest thing to unpick it.

I went to work that day and was sitting with a few people in the staff room. They were talking about something, I was not listening. I was pretending to listen, nodding and stuff. But, my heart was pounding so hard that I could feel the vibration in my lips. I was so hot…so so hot. Why? Because I was trying to build up the courage to tell them what I had achieved. It felt a bit like when you really like someone, and you want to hold their hand, but you over think it and play it out too hard on your mind so that when the time comes…it makes you feel sick. So sick.

“So I said to him that I will not cover that class on…” and mid-sentence, as this lady was talking I said “I had some of my work published today, its online, it’s not a real book”. I say I said it.

Imagine a 14-year-old boy going through publicly …voice up and down. Trying to speak in class. That’s what I sounded like.

Silence… and the they all laughed. And I was 14 again. My face started to burn. I wanted to hit one on the head with her cup that said, “Best teacher”. One went “really” and pushed his head back as if I ad just told him that I had just come back from the moon. Then one of the women went “Oh ..wait…she is serious. Are you serious Kendra”. I cleared my throat and said yes…yes, I was serious Jean (Not real name). Jean said “Oh, what about”. I puffed myself up a bit and said it was about gangs and CSE. I kid you not, they didn’t physically do it, but they rolled their eyes so hard. Jean looked at the others and look was simply….oh…we thought you meant that you had written about “real stuff”. She cleared her throat and said “well is think there are no gangs around here. It’s a London thing”

I stood up and walked out. Face burning, anger rising. And I have never really mention it since. And when it does pop up in conversation I get the impression people think, those that like me, why are you not promoting this more? The truth is, I am not sure if people will believe me that I done it.

So, I made a second online training. For young people. The adult one and the young person one mirror each other so that the adult learns at the same speed as the child is educated. The aim is that the double impact on BOTH young person and adult we create a better learning environment where they can learn off each other.

So Jean (Not real name but has a cup saying “best teacher” )..yer you Jean. I have created some online training. And had it published. And I have done it twice. And yes, it’s on gangs.

I’m not an English teacher and I am never going to write a book about science or..I don’t know.. Japanese poetry. But I do know about gangs, CSE and county lines. So yes Jean, that is what I write about. And I am very proud to do so.

Out of the Shadows